Is a Turtle Considered a Reptile? 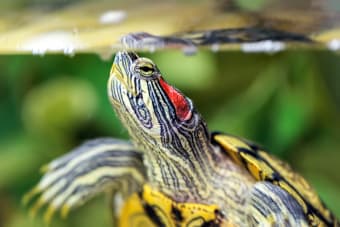 Turtles are kind of ambiguous creatures so you may have wondered if they are reptiles or if they are amphibians. Here, our Carrollton vets explain this key fact that every aspiring turtle owner should know.

Turtles are amazing creatures! Their unique appearance, lifespan, and character all work together to make them fun pets. The uniqueness, however, can be a bit confusing too. For example, many people are unsure of whether a turtle is a reptile or an amphibian. Here, our team explains more.

What is a turtle, anyway?

While the answer to this question may feel a bit self-evident, when two different people talk about turtles, they may actually b speaking about completely different animals!

The term turtle is usually used in America to speak about a very large swathe of creatures that are part of the scientific order Testudines. There are two very different subgroups within this order and over 360 species of turtle found across the entire world!

As you might expect, the main characteristic that distinguishes turtles from other orders of animals is their shell. This unique protective adaptation is made from bone and connects the ribs of a turtle into a little closed box. That's right, a turtle actually isn't able to remove its shell!

Is a turtle a reptile or amphibian?

Believe it or not, turtles are reptiles and not amphibians. They have much more in common with crocodiles, lizards and snakes than they do with frogs or salamanders.

But what makes a turtle a reptile? Well, turtles are cold-blooded, four-legged (or sometimes finned) vertebrates that have hard, impermeable scales covering their bodies. They also lay hard-shelled eggs onland (even if they spend the vast majority of their lives in water. Lastly, when baby turtles emerge from their eggs, they are much smaller and less-developed versions of adult turtles.

Amphibians are cold-blooded and four-legged in their mature stages as well. However, there are a few key factors that distinguish amphibians like frogs from turtles. Amphibians have soft, permeable skin that is used as a secondary respiratory organ in addition to their lungs.

Amphibians lay their eggs in water and their eggs don't have shells. When an amphibian is born, it has gills and looks totally different from mature members of its species. Just think about the difference between a tadpole and a frog. The change from tadpole to its eventual mature stage of life is a huge difference between reptiles like turtles and amphibians.

What about sea turtles?

Even though sea turtles spend almost their whole life in the water, they are also reptiles. Sea turtles don't have permeable skin, they lay their eggs on land, their young are born looking like turtles and they have to surface to breathe air all throughout their life.

Don't let the unique fins of these species of turtle distract you, sea turtles are just as much reptiles as snapping turtles.

Are you looking to adopt a turtle as a pet? Contact our Carrollton vets today to learn more about proper turtle care.

Carroll County Animal Hospital is accepting new patients! Our experienced vets are passionate about the health of Carrollton companion animals. Get in touch today to book your pet's first appointment.